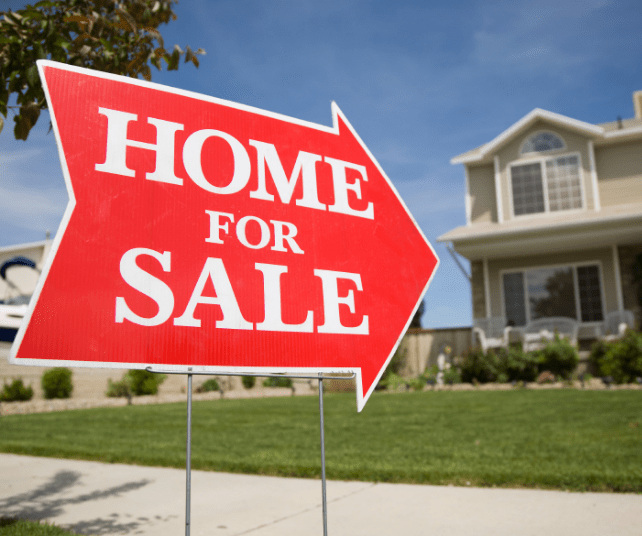 While it is now officially fall sweater season in the Midwest, we know many people are working through the smoke and fires on the west coast and the terrible hurricane losses in the south. Please let us know if there is anything at all we can do for you in these rough times.

The biggest market news this week is that the tech selloff in the stock market continued to drag prices down to August 1 levels. On the global front, most developed countries have recovered enough to be considered done with the volatile “stage 1” of economic pandemic recovery (more on these stages below).

The Federal Reserve kept interest rates near zero on Wednesday this week, noting that the pandemic “will continue to weigh on economic activity” in the near term “and poses considerable risks to the economic outlook over the medium term.” Fed Chair Jerome Powell told reporters that more fiscal support is likely to be needed. (Federal Reserve) By encouraging more fiscal support, Powell is telling Congress to pass more stimulus spending ASAP.

The election outcome is not a key factor for big businesses. The stock market has shown only limited reaction to changes in polling on the presidential election, and top executives have largely similar plans for the future regardless of who wins in November. (Axios)

Florida is the first state to stop the additional $300/week unemployment benefits that came out of an executive order from the President. Florida Governor DeSantis says the state’s jobless program doesn’t have the resources to meet the 25% matching requirement, so out-of-work residents will lose out on the extra cash from the federal government. (Axios) Meanwhile, Congress has not made any progress on funding additional unemployment benefits.

New numbers show U.S. consumer spending slowed in August, with a key gauge (core retail sales) unexpectedly declining. Consumer spending accounts for more than two-thirds of the U.S. economy, so a decline now is not good news. A major factor was the reduced unemployment benefits supplement, which cut income by about $70 billion in August. (Reuters) The chart below shows retail and food service growth for the last 12 months. 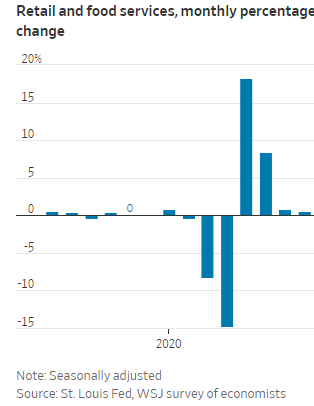 “Consumers are being increasingly cautious with their spending. If Congress is unable to extend fiscal aid to households in the coming weeks, the economy will be particularly susceptible to a cutback in consumer spending.”  -- Gregory Daco, chief U.S. economist at Oxford Economics in New York. 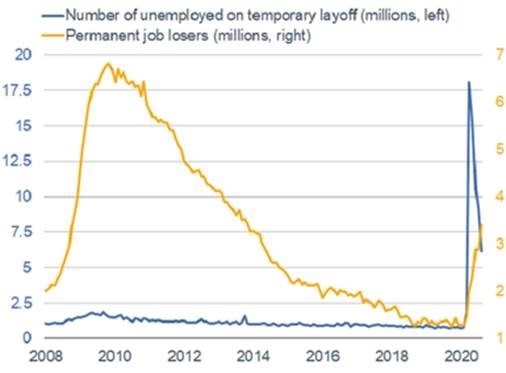 Note the different scales for the two lines. Source: Charles Schwab, Bureau of Labor Statistics, as of 8/31/2020

Stressed by pandemic, most young adults now live with their parents. For the first time since the Great Depression, the majority of 18- to 29-year-olds have moved back home. The coronavirus recession has hit young people especially hard. (Pew Research, Axios) 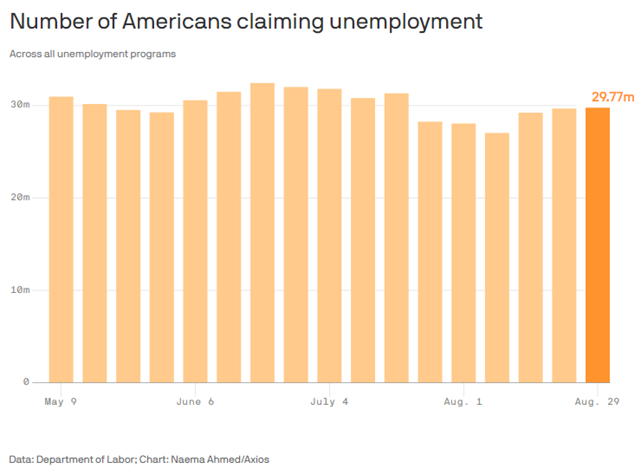 Europe attempting to contain rising Covid cases. Weekly cases in Europe now exceed those from the continent’s first peak in March. The increase is due partly, but not entirely, to improved testing. Some countries have reintroduced measures to limit social gatherings. (CNBC)

Brexit could cause more damage to Britain than the pandemic does. A “no-deal” outcome would inflict damage to the UK economy that’s two to three times larger than that of the worst pandemic witnessed in post-war history, according to Goldman Sachs analysts. (CNBC)

Three stages of economic recovery from the pandemic

Stage 1: Countries rebound from initial shutdowns. The global recovery appears to have reached the end of stage 1, where sharp economic rebounds from the initial lockdowns are now largely complete across most of the world, as you can see in the chart below. 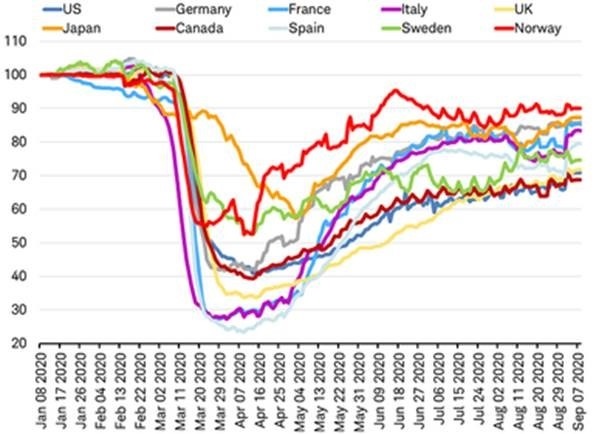 Source: Charles Schwab, Bloomberg data as of 9/8/2020 via Advisor Perspectives. A reading of 100 means broad economic activity has returned to pre-pandemic levels.

Stage 2: Careful management until a vaccine is widespread. Between now and the widespread availability of a vaccine, economic progress will  be uneven, interrupted by a return to localized lockdowns due to virus outbreaks (e.g. recently in England, Spain, France, and Japan).

Stage 3: Widespread availability of a COVID-19 vaccine. Once an effective vaccine is readily available with consistent adoption, all sectors of the economy can return to normal. However, the mere existence of a good vaccine doesn’t flip the switch to stage 3 overnight. Initially, supplies may be limited and would likely go to first responders in countries that have preemptively secured supplies ahead of availability.

We hope you have a good weekend – and please stay safe in these crazy times!